Just a quick post to say thank you so much for all the sweet things you left on my blog. I'm glad you enjoyed the cross stitch and the old pictures. As I told Annie, I hope to do more posts about my younger days. I think this blog is a perfect place to record those and maybe one day, my kids and grandkids will enjoy reading about my early life.

I also have an apology to make. I thought all the comments on my blog were showing up in my gmail account. However, I have discovered that this is not so. I will now be looking more carefully and trying to respond to your comments. After all, if you take the time to comment, I should take the time to respond. I love this blogging community and all the wonderful people I have "met".

I'm close to the end of my first year of blogging and I have 47 followers. I'm really excited about this. I'm going to host my first ever giveaway at the one year mark or when I get 50 followers, whichever comes first.
I'm pulling some things together.

Thanks for dropping by.

Hugs,
Sharon
Posted by Grammy Braxton at 2:09 AM 4 comments:

Oh my. I didn't realize it had been so long since I had done a post. I guess my new found freedom has gone to my head. I've been busy reading, cross stitching, planning, etc. I've really not been getting a lot done but I have a lot of lists. Do you make lists? I am the Queen of List Making. I have a list for everything: what I plan to do this week, grocery list, the order of stops when I run errands, how I want to change things in a room; they just go on and on.

I have gone back to my first love. I'm cross stitching again and I have had such a calmness about me this past week. I picked up a piece that I worked on last year and settled in to finish it. I think I had to quit because I was having trouble with my right hand and wrist. I'm pretty sure that's why because now I have to take breaks or I can't move my hand the next day. I'm so tired of having to pace myself in every thing I do. Clean a while, sit down, run errands, rest, cross stitch, take a break. ARG! It's so annoying. I have been watching the Tour de France and cross stitching in the afternoons. I'm recording the live shows. I love cycling. I wish I could ride like those guys. It's poetry in motion.

Anyway, back to the cross stitching. I have a thing about seasons. My daughter asked me once, "What is it with you and seasonal stitching?" *grin* I really don't know but they speak to me. The piece I'm working on is a street scene with different shops. I've already done at least one of the seasons and maybe two. This one is summer. 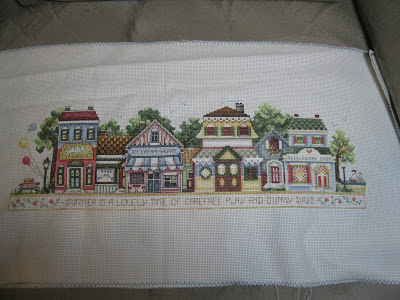 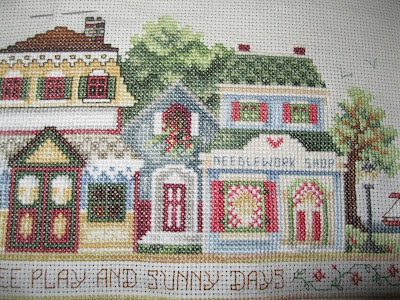 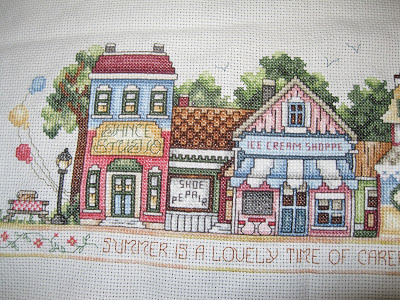 Saturday, my sister found some old photos in a box she was going through and sent them to me asking who was in a couple of them. I love looking at old photos and these were some "really" old ones.

This one was made in the summer after I was born in February. That would be the summer of 1951, 62 years ago!

This one is of my Dad when he was around 15. 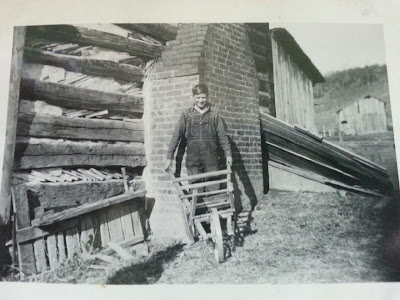 There are so many memories linked to those photos. They were made at my Grampa and Gramma Broyles home. The house was log. In the photo of Dad, you can see the rock chinking they used between the logs. Later there was concrete covering this if I remember correctly. At the back of the front two rooms, there was an addition of another room and the kitchen. There was a porch along the front with a big swing. At least it seemed big when I was small. My cousins and I would get that thing going really big and get flipped backwards out into the yard! It was hilarious. We'd jump up and run around up on the porch and do it again. My grandmother was bedridden and her bed was in the living room right in front of the window where the swing was. She would tell us to stop swinging so high, we were going to get hurt. After a couple of times doing really big swings, she would send one of the aunts out to settle us down.

There was also a creek that ran along the edge of the farm and in the summer we cousins would play down there, building dams to make it deeper and digging holes and just having a really great time. Because my grandmother was bedridden, she either sat or laid in bed facing out toward the room. It was really hard for her to turn her body and her view out the window was limited. We came to believe that Gramma had eyes in the back of her head because no matter how sneaky we were nor how quiet we were going to the creek, she would know and she would yell for us not to get in the creek because it was "Dog Days" and we would get sick. "Dog Days" are usually the hottest part of the summer, most often in August but for Gramma, it was all summer long.

Living in the country was a wonderful way to grow up. I was an only child and was content most of the time to play by myself, but when we went to Gramma's, there were cousins just across the road to play with. We would play outside until dark. There was a ditch that ran between the yard of the house and the hay field. It was mostly a dry ditch, only having water when there was a lot of rain. We called it a gully. The water washed away the dirt from the tree rooms and there were always rocks and sticks and leaves. We had our houses in the tree roots and we would "cook" and "clean" and "raise our babies". I think about that now and it seems so far away. That was a great life when I was a kid. I didn't have responsibilities and there was always someone around to check on us and make sure we were okay. Most of the time we were just left to our own plans and nobody worried about us.

Ah well, life goes on. But I do like looking at old photos and remembering when. Do you have fond memories of your childhood?

As always, thanks for stopping by. Today it is raining, raining, raining. I am watching the recorded Stage 5 of the Tour and cross stitching. Thursday is July 4, Independence Day here in America. I hope all of you here in America have a wonderful 4th. Happy Canada Day to our neighbors to the north, a little late. And to everyone, I hope you have a wonderful week no matter where you are.