Anyway, here I am. If I have any followers left, HI! A special thank you to Gracie. My daughter told me you were following her now and she thought your comment was so sweet. You made her day.

What have I been up to? Hmmm, good question. I'm back to my favorite craft - counted cross stitch and I currently have 5 projects underway. I've have never been a rotation stitcher. I've always, well mostly, stitched on one project until it was finished and then moved on to something else. However, I discovered Caroline Manning Designs earlier this year and she is doing a lot of SAL's. I realize I probably have already talked about her and hopefully shown you one in progress. I'm doing 4 of her SAL's and then working on Sam's birth sampler. I got a little bit annoyed night before last. I had picked up the sampler to work on and though I counted and thought I had my center, apparently I have forgotten either how to count or how to divide, because halfway through the part I was stitching, I realized it wasn't going to be centered. As with James' sampler, I making Sam's up from different patterns and putting it all together in one piece and that requires a lot of math to get everything looking right. I've been a bookkeeper all my working life and I must have forgotten my math skills when I retired!

There's no photo of Sam's sampler as I really don't have enough done to show. But I've been working on the Granny is No Square SAL and I'm up to part 4 on it. 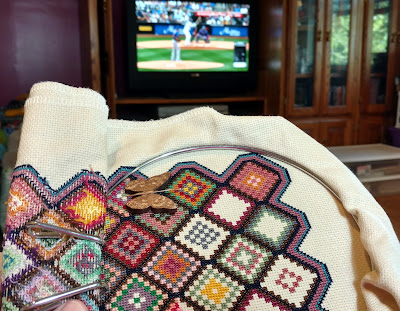 And that's a Chicago Cubs baseball game in the background. I spent a happy Wednesday afternoon a couple of weeks ago enjoying two of my favorite pastimes.

I've also started on the Secret Summer Garden Labyrinth SAL and got a little bit done on the border and part of the first row. 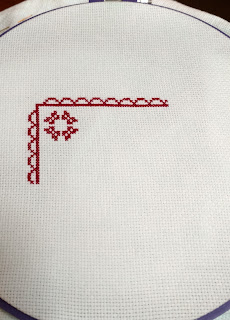 The other two have starts but no photos. I'm rubbish at taking progress photos. I need to do better.

A couple of weekends ago, the maternal side of my family had a family dinner. We so seldom all get together now that it was fun to see everyone and get to visit and eat! My son came in with his 3 kids and my daughter came with both her boys. Their respective spouses couldn't attend but it was so great having all my little family here together.  Doug came up a couple days early and we had a great visit. We have limited sleeping space since we have commandeered the extra bedrooms for crafty and computers. But we worked it out. The girls slept with me and Doug and Elijah slept on an air mattress in the living room. We had such a great time. This is first time in 3 years that they have been here and they had a ball. They were fascinated by the garden.  Lilly even picked me some green bean flowers! So we had a lesson on growing things and how beans grow from the blossoms.  I suggested that maybe she shouldn't pick any more flowers in the garden and she, happily, said okay. It was just too funny. Doug took them to the local park on Friday so they could run and play and get some of their energy out and give Grammy a rest.  They left after the dinner on Saturday but not before all 5 grandkids got to hang out at Grammy and Papaw's.

Abby came in on Saturday in time for the dinner and stayed Saturday night. James is becoming a determined 4 year old and Sam is just getting sweeter. James will sometimes play with Sam and other times, he doesn't want to share. Sam kept picking up some of the cars and blocks James was playing with and James would take them back and say, "No, Sam!", I found this so funny, but then Sam looked around and picked up a car, held it up, and then jerked it around behind him, all the time looking straight at James. I lost it. Sam is still a snuggler and after all the running and playing he did at the dinner, he snuggled up to me and we covered him in a light wrap and he went off to sleep. Was this Mimi happy????? Does the Earth circle the Sun?????  (Sorry for the huge expanse of white leg, but holding a grandbaby is more important than being stylish). 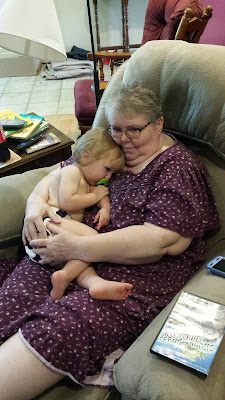 And Papaw was in high cotton because he had all five hanging around him most of the weekend. He was so delighted and it showed. Even 4 can be a handful. There's a boat dock at the park where we had the dinner and he and Doug took Ella, Lilly, Elijah and James down to feed the fish. He usually looks slightly overwhelmed when he has them all doing something, but he loves it. 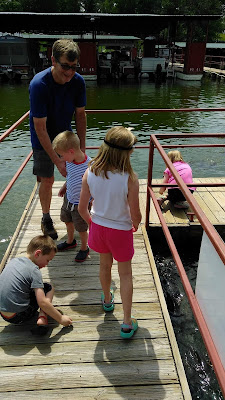 I adore this photo of the four on my front porch swing. 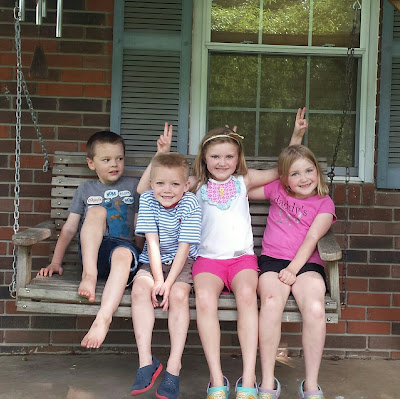 From left to right - James, Elijah, Ella and Lilly 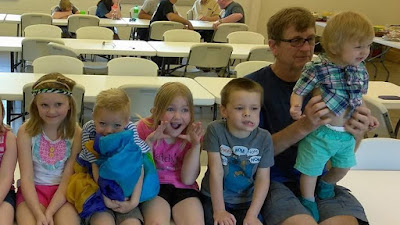 At the dinner along with the Hubs and Sam.

Okay, I'll stop now. I have more to talk about but maybe if I save it, I'll be back sooner with another post. One can only hope. :)

As always, thank you for being there for me and for reading my blog.