It would appear that I've have experienced a loss of blogging mojo. I have thought about it several times in the last few weeks but when I sat down to blog, I found I didn't know what to say. That's rare for me. I always have something to say about the world around me. I'm scant on photos also so this will be a word heavy blog.

Since Sam's birth, I've been back twice, once for a weekend and then for about 5 days. The first trip was for Papaw to meet the newest grandson and the second trip was to help out a little bit. Sam had some issues keeping anything on his stomach and there were several tests done to determine what was going on. Poor little thing was losing weight and his Mama was frantic. They finally saw a pediatric gastroenterologist who determined Sam was fine but he has a slow tummy. He suggested adding rice cereal to his formula and Abby is now completely dairy free as she is nursing him also. When she has added dairy back to her diet, even in small bits, he seems to react and spit up more.  I'm am hoping he is not going to be dairy intolerant; that he will grow out of it, but we'll just have to wait and see. James is such a great big brother. He really loves Sam and will lie in the floor and talk to him. 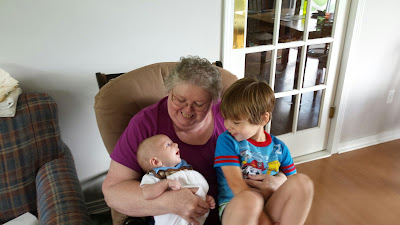 While I was there, I did hold Sam but I mostly played with James. It makes me so happy when James sees me, smiles that sweet smile and says, "Hi, Mimi". Of course when Papaw is around, all of James' focus is on him. That boy LOVES his Papaw. Anyway, I learned a great deal about dinosaurs and heavy equipment (trucks, back hoes, bulldozers, etc) while I was there. This boy can give you details on heavy equipment that amazes me. He was pointing out the hydraulics on a loader on day and I asked him what hydraulics did. He explained it very well and let me tell you, I was amazed. Abby and Doug don't have cable or dish to watch TV but they do let James watch YouTube videos and right now, it's all about "Mighty Machines". He retains so much from these shows. He also loves books which makes his Mimi very proud. He loves being read to and also, sitting in his room looking at the books. Abby says he makes them read books over and over until he has them memorized so that he can read them to himself. And he's 3 years old. Kids are so smart today.

Next week, I am going to GA to see the 3 oldest grand kids. I've not seen them since February and I miss them so much. I'm keeping fingers, toes and everything else crossed that I don't have pain issues or get sick before Monday. I'm also going by myself, something I haven't done very much. My Mom use to go with me each time I visited and in the past couple of years, the Hubs has gone or has driven me down and come back to get me later. I've been down a few times solo so I'm looking forward to it. Surprisingly, I enjoy my alone time in the car. I'm going to download a couple of audio books to a USB and listen to them on the road. I'm not enjoying radio much these days. Maybe I'm being an ostrich but all the political issues and the rants have made me just want to shut it all out. So listening to audio books will be a good thing.

BTW, I have a new car!!!! The truck I was driving was in good shape but it was wearing me out getting in and out of it. Even though the Hubs put running boards on it to help me, it was still a struggle to get up and settled. The Impala we had was really needing to be traded or something as it was on its last legs. So we bit the bullet and traded for 2 new vehicles. We actually used the truck and Impala for Hubs' Spark, a new model Chevrolet has out. It looks like the runt of the little in a bunt of crossovers! It really is cute and gets great gas mileage and that's was the main objective as he drives 50 miles one way to work each day. I got a 2016 Chevrolet Equinox. I LOVE IT! I don't love the car payments but I will happily pay them to have the comfort and ease of driving this car gives me. I spent all day one day last week running errands, getting in and out and going all over town, and I was not exhausted. In the truck, three stops were the max before I had to come home. Please humor me while I show you a photo.  LOL 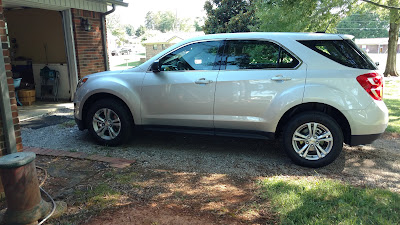 The weather has been hot, hot, hot and I've stayed inside as much as possible for all of July. August is already starting out hot but I'm hoping for some cool down as we slide into Autumn, my most favorite time of the year. I love the turning leaves, the blue, blue skies, and the great temps which mean I can open my windows again.

On a much sadder note, I lost my big, sweet, goofy Bandit 3 weeks ago. He was 11-1/2 and his heart just got tired. Having to make that final decision was so hard.  I'm not sure I will ever be able to have another dog. This one took a huge piece of my heart with him. He was truly the best dog we ever had and was so loving. 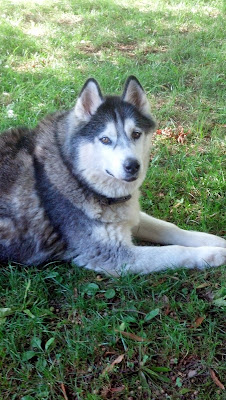 So I will stop now. I'll be back but I'm not making any promises as to when. :)