Last night I was thinking about doing a devoted post to reading and I thought to myself that today's is as good a time to start as any. So, if all goes well, I will do a Saturday post just concentrating on books. It may not be every week but at least it will get me in gear to do it.

According to my 2017 Reading Challenge spreadsheet, I have read 30 books so far this year. I'm almost half way to my goal of 65 and the year isn't half over yet, so I think I'm pretty much on track.

I have become totally hooked on "The 1st Ladies Detective Agency" series and have now read 3 of them. I borrow them from the library through the eLoan program. They are delightful books and I love the descriptions of Botswana. The books themselves aren't very long and I can usually finish one in a couple of days, if I devote myself solely to it. The trouble is I can't seem to read one book at a time. I usually have a book on my phone and my tablet and an audiobook on my tablet.  Anyway, if you haven't tried this series, do give it a try.

All the images will be borrowed from Google as I'm rubbish taking screen shots.

I've also read the first two books in the Duncan Kincaid series by Deborah Crombie. I have a love of English detective novels. These have not disappointed my love. The last one I actually listened to, "All Shall Be Well" was intriguing and I didn't figure out the culprit until the very end. I really, really like that.

I'm also reading, from the beginning, the Detective Lynley series by Elizabeth George. I discovered these books several years ago but had no idea they were part of a series. So even though I've read probably 6 or 7 of them, I was happy to see that there are currently 19 in the series. So I decided to start at the beginning so I would understand the characters and how they came to be. I have read that there is a British TV series based on these books but I haven't been able to find it yet. I have subscribed to Acorn TV and Britbox on Roku but maybe I'm not looking in the right spot. If any of you know about this series and can point me in the right way, I would really appreciate it.


At the moment, I'm reading "Teammate" by David Ross. He retired this year from the Chicago Cubs as a backup catcher and his book is a delight. And of course, anything about my beloved Chicago Cubs is okay with me.

I'm also reading "A Fatal Grace" by Louise Penny, the second in her Three Pines series. Well, actually the series is Chief Inspector Gamache, but the first two are set in Three Pines. Again, a detective series. Honestly, I do read other books but I find this genre tends to be my go to.

And lastly, I'm listening to "The Handmaid's Tale" by Margaret Atwood and read by Clare Danes. I've really only started it but it's getting a lot of hype right now. I believe there's a movie about to come out based on the book and I've seen a lot of reviews that seem to feel it's relevant for our times.

So there you go, a reading update post. I'll really try to be back each Saturday for an update unless I haven't finished any of the books.

As always, thank you for reading my blog. I hope each of you has a wonderful Mother's Day and that everyone enjoys the weekend.

On April 30, we went to Sparta to help Sam celebrate his FIRST birthday. His actual birthday was April 23. Abby did a great job decorating using a robot theme. She got a lot of great ideas from Pinterest. Photos? Did you say you wanted photos? Here ya go...... 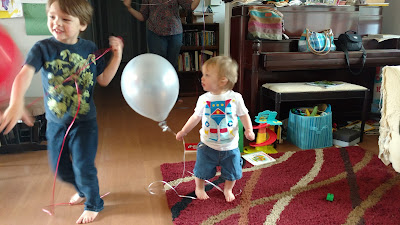 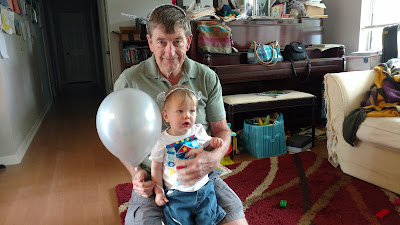 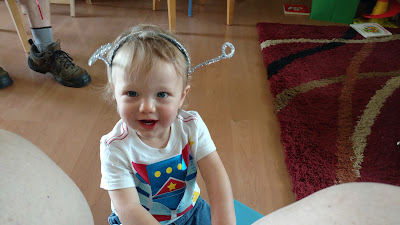 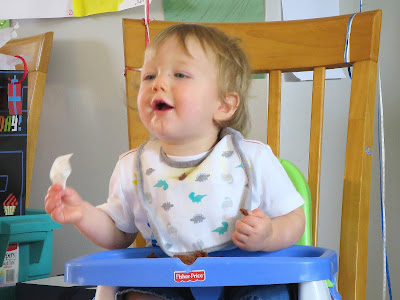 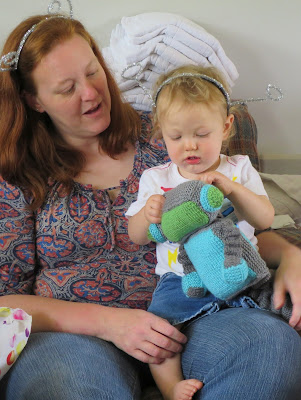 Mama and Sam looking over the robot Mama knitted for him. 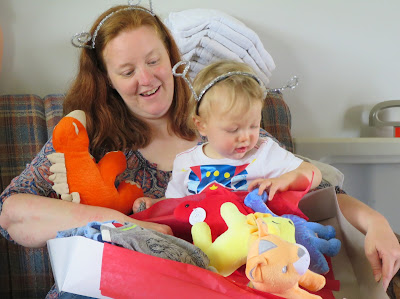 I thought I had photos of the table and decorations but apparently I was having too much fun to get that. Head over to Abby's blog, AbbyCrafty, to see the absolutely adorable decorations and her ideas on that last first birthday party.

I am glad to say I am feeling much better. I decided to try adding B-Complex vitamins to my supplements. I read the bottle closely and decided to go for it. After about a week, I was feeling so much better that I thought I would do some research. I have been having severe back pain that kept me from doing simple things such as loading and unloading the dishwasher, moving clothes from the washer to the dryer or even walking to the mailbox. The pain was so bad that I would have sit down for a good while before I could get any relief. (BTW, both my primary doctor and my rheumatologist have stated that my back pain was because of my weight. I realize that losing weight would help my health overall, but to dismiss it out of hand really annoyed me.) I have avoided taking pain meds as much as I can because I don't want to lose the value of them when I really need them. I was shocked to learn that B Vitamins are a great source of relief from back pain and that they also help reduce inflammation. If you know anything about RA, you know that inflammation is the major cause of pain. Stress is a major cause of flares which is a result of the increase in inflammation. I was starting to have aches daily in my hands, elbows and toes. After 3 weeks on B-Complex, I can say that I am having much less back pain, the deep aching in my toes has lessened and my hands are wonderful.
I'm still taking breaks when I crochet and cross stitch, but that just because I really don't want to push it. Believe me, there were be discussions with my rheumatologist at my next appointment.

Crocheting......I've started on Christmas presents for the grands. I'm notorious for wanting to make things for the grands and waiting too late and then procrastinating and never finishing. Hopefully, by starting in May, I'll finish on time. We'll see.

I'm making my two granddaughters mermaid tail snuggle sacks, one in green and one in purple, their favorite colors. I've finished the green one with the exception of sewing it together and have started on the purple one. For the grandsons, I'm doing a rocket ship, a dinosaur tail, and a robot (hopefully). I have the yarn and patterns for the first two but I'm still looking at robot snuggle sacks.

Cross Stitching......I've added two more SALs to my stitching projects. I'm waiting on fabric for both of them and will show photos later when I've managed to get started.

This being retired is soooo much fun.

I splurged this spring and purchased the MLB single team package so that I can watch most of my beloved Cubbies' games. I'm really enjoying that (except when it's shown on FOX and then I just listen to it; I can't stand the announcers for FOX Sports, heehee) and getting to them in action. The only games I don't get to see are when they play in Atlanta and Cincinnati. Those games are blacked out because I live too close to them. 250 miles (approximately) is close????? Oh well, I enjoy the radio announcers so no loss.

I've finished several books and started a couple more but this is getting long so I'll save that for next time.

As always, thank you for visiting and for being such great bloggy friends.