Okay, I admit it, I love Adele! And her latest just seemed to fit.

How is everybody?? I sort of lost January and almost February but I'm here, alive and kicking. January was a really blah month and it passed by without me really noticing it. I'm not a happy camper when it's cold, wet, snowy, sleety and January and February have been all that and more.So I'll just skip on by January and move on to February, if you don't mind.

February has been a really full month both in celebrations and in medical issues, not me, thank goodness. My sister started the month having gall bladder surgery after having been sick for 2 months, She is doing much, much better although a little slow recuperating, February 4th saw us in Atlanta at Emory Hospital with my son having more surgery. This time, he was having plugs removed that had migrated from his leaky mitral valve in an earlier surgery. Luckily, they traveled south and ended up in his femoral artery in his groin area and in one of the iliac arteries in his stomach. The surgeon was able to remove both through a catherization procedure so he didn't have to have an incision in his stomach. He is recuperating very well and is back at home with his family and back at work.

I've been doing some crocheting but haven't been hugely productive. I'm trying to remedy that.

I made a baby blanket for a cousin who is expecting her first baby, a little girl, in March.  I used "Call the Midwife" pattern and fell in love with it. I also made a tiny hat. 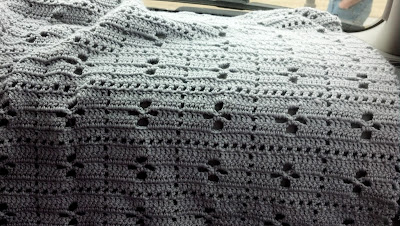 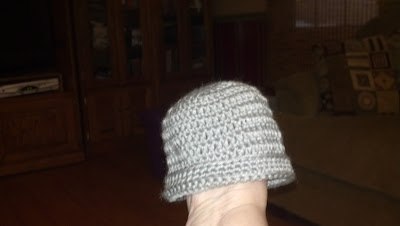 I also made a pair of fingerless mitts for our postal carrier. She goes above and beyond lots of times for me and I just had to do something for her. She is the sweetest gal and she was so happy with the mitts. 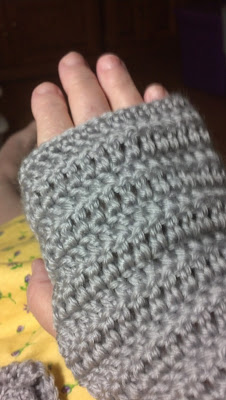 Here is a teaser of the baby blanket I'm making for Lollypop. I can't show you everything because I'm not letting Abby see it until it's finished. I'm hoping that is soon. Boy, that's going to be a lot of ends to weave in. 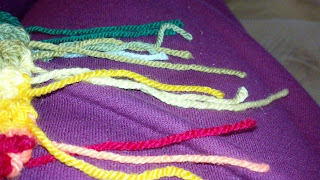 And I have to show you my sweet, sweet hare who traveled all the way from France to come live with me. Meet Miss Rosehip. Stephanie at Millefeuilles made her especially for me. I adore her. She shares my office/craft room with me and keeps watch over all the yarn and cross stitch projects. 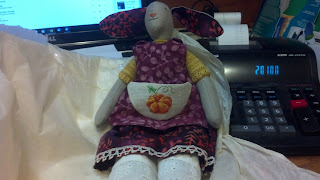 I'm also working on a surprise for the grandkids for Easter but again, since Abby reads my blog, I can't show it to you yet. I'm enjoying it a great deal, I can tell you that. I'm famous for planning these things and then not quite getting them done for the specific time I want them. Keep your fingers crossed that this time I am able to do a better job.

I will close now. It's so good to be on here and talking to all of you. Stay warm or cool, whichever applies and have a wonderful weekend.

Hugs to you all,
Sharon
Posted by Grammy Braxton at 11:34 PM 9 comments: