The title is the first thing I thought of when I saw how long it has been since I posted. Time has just passed me by when I wasn't looking. My mind is like a sieve these days and I have a lot of trouble remembering what happened yesterday, much less what happened 3 months ago. :)

I had a birthday in February turning 67. My age really doesn't bother me most of the time but every once in a while, I think, I'm 67......when did that happen? I've finally gotten my blood pressure back under control. This necessitated a change in medication and there was a period of adjustment, but I'm finally back on track and my levels are looking good.

My RA seems to be under control except in my hands and feet, but the pain is more a dull ache and I can tolerate that. However my left shoulder, which is completely shot and is a candidate for a replacement, is starting to bother me quiet a bit. I haven't reach the point of intolerance yet but I am slowly moving toward that. Shoulder surgeries, whether rotator or replacement or whatever, are a pain in the butt. And the therapy, oh my, the therapy. I've had rotator cuff repair on both my shoulders and had both my knees replaced. The therapy for the knees is a piece of cake but the shoulder is nothing but downright pain. My orthopedist says I'll know when it's time so until then, I'm muddling though.

James turned 5 in February and this happened: 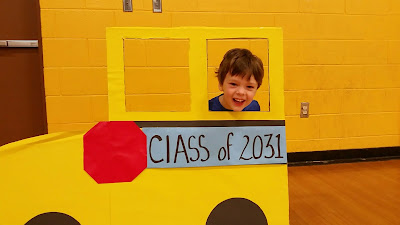 He registered for kindergarten in April and Abby sent me this photo. I looked at the year and realized that I will be 80!!!! when he graduates. I can't even fathom being that age. I just hope I'm still around to see him graduate even if it have to use one of those electric scooters!  HA!

Sam turned 2 on April 23. He is growing into a loving, very active little guy. He's jabbering constantly and I'm actually able to understand most of what he says. He eats almost everything and eats with relish. Abby says he's like a Hobbit. He has meals all day long. We were going down last Saturday, 4/28, for his party but the poor little fellow got sick on Thursday.  He tested negative for strep but his throat was sore and swollen and he didn't want to eat much. Abby postponed the party until this Saturday, May 5.  James got sick on Saturday with much the same thing. I had been joking with Abby that I was going to quit coming to James' parties in February because I have ended up sick after them for two years now. Hopefully, both boys will be 100% on Saturday and we can all have a great time.

What have I been reading?  A lot!! So far this year, I've read 24 books. That includes ones on my Kindle, library ebooks, Audible audio books and library audio books. I really enjoy listening to books while I cross stitch or crochet, especially at night. I use Overdrive to borrow books from the library and have downloaded their app, Libby, to use. I have to say, I wasn't pleased with the quality of the audio books on just the Overdrive but with Libby, they are crystal clear and I'm a happy camper.

I'm working my way through Deborah Crombie's Kincaid and James series. I'm on book 12 and I really enjoy these books. They are about a Scotland Yard Chief Inspector and his sergeant. At this point, Gemma is now a lead inspector at another station and she and Kincaid are living together with her son and his son, both from previous marriages. They aren't married but I see that happening soon. The mysteries are really well written. If you enjoy detective mysteries, I thing you would enjoy this series.

This was an excellent book. It's the story of Apollo 8 and the race to the moon with Russia. The astronauts on Apollo 8 didn't land on the moon but they did go to the moon and orbit it, gathering vital information for the the moon landing of Apollo 11 seven months later. One of the reasons I so enjoyed this book was that I was a senior in high school during this time in 1968 and 1969. A lot of the events that happened that year are still just as fresh in my mind as if they just happened. That was an amazing year. I found myself nodding my head as the reader talked about the Vietnam War, the demonstrations during the Democratic Convention, the assassinations of Martin Luther King, Jr and Robert Kennedy. I even laughed out loud when he talked about the astronauts being invited to the White House for a formal state dinner with then President Lyndon B Johnson. The astronauts were in quarantine to avoid getting sick before or during the flight and the medical doctors had vetoed the dinner. President Johnson insisted and they were allowed to go. You need to understand that "Hong Kong" flu was very rampant in December of 1968. My mother was terribly sick at the time and Dad and I finally convinced her to go to the doctor. She told the doctor she thought she had "Hong Kong" flu and he told her she would be over it in about 7 months. She was pregnant with my sister! That still causes me to chuckle.

I'm also reading Louise Penny's series about Inspector Gamache and the small Canadian town of Three Pines. This series is excellent and I thoroughly enjoy each book. I've read through book #3 so far.

As far as crafting, I finished Eddie's blanket and mailed it to him. He was very pleased and said he cherishes it because it's the only handmade thing he owns and because it's so very warm. 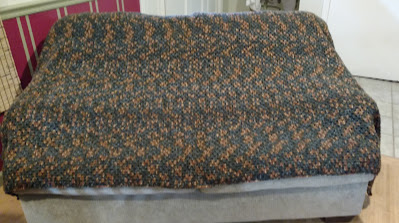 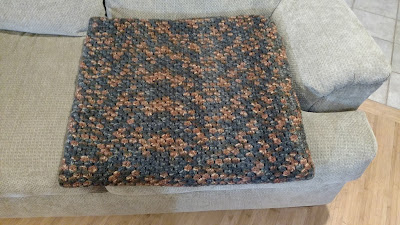 I am very pleased that he is so happy with it.

I'm back to cross stitching now. I saw a pattern on a FlossTube video and I really, really wanted it. The Hubs and I went to Pigeon Forge for the day in early March and I was able to find it at Dixie Darlin', an LNS there. There is no longer one here in Morristown so I have to travel or order online. I do a lot of ordering online but sometimes, I just want to see and touch and ooh and aah. I finished this but still have to get it framed: 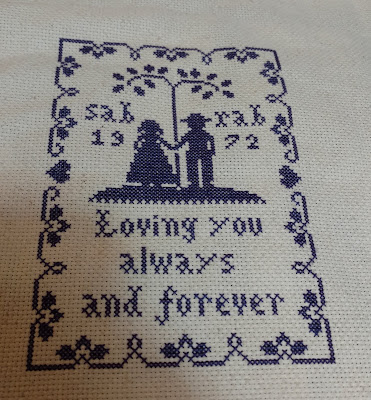 The lady who owned the LNS here in Morristown called me in mid March and asked if I would like some fabric and things left over from the shop. She said she hadn't managed to sell all the inventory she had left over after the final sale in the shop and she brought me two huge plastic totes, one filled with fabric and the other with odds and ends and a little more fabric. I've been like a kid in a candy store. I shouldn't ever have to buy fabric again unless I want a specific piece. 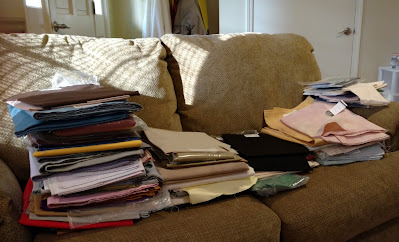 That's all Aida in the counts of (going left to right) 14, 16, 18 and opalescent. The pieces on the arm of the sofa are small cuts of random sizes. I use Aida exclusively. I've never tried linen but I'm happy with my Aida. I was just blown away.

This post has really gotten long. If you are still reading, thank you. I have one final photo to show you. I'm trying very hard to finish Sam's birth sampler. James was 4 when I finished his and it still isn't framed. Sam is now 2 and I would like to get it finished and both of them framed by the end of summer. I have struggled with the animals I want to put on it. I want it to be different from James' but somewhat the same. But I did finish this cute little giraffe Saturday night. 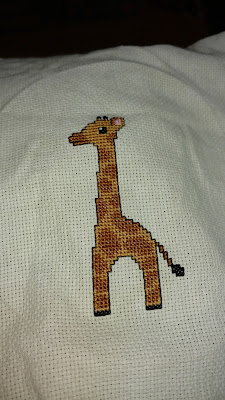 If I disappear for another 3 months, it's because I'm working hard to get this finished. I'll post photos of both of them when they are finished and framed.

Thank you, my bloggy friends, for stopping by and for commenting. I am so happy to have you in my life.