No, I haven't dropped off the face of the earth and no, I haven't stopped blogging, although it would appear that way. I certainly hope you guys haven't given up on me.  I've just been 1) lazy, 2) dealing with flares, 3) having weekend visitors, and 4) lazy. I have lots of stuff to tell you so I hope this post doesn't go on forever.

July was a MONTH! I have several crochet projects ongoing and one I'm absolutely panting to start. I also have a couple of cross stitch projects I'm working on and one I am eager to start.

My train of thought keeps getting interrupted because my husband is fixing himself something to eat and talking to the dog which cracks me up. Now, back to my post.

I think I've told you about my Cubs Season 2015 blanket. It's coming right along and I am having the best time working on it. I don't get to see all the games since WGN no longer broadcasts them. I have to wait for the MLB network or ESPN to show them and they are few and far between. I do have a scoreboard app on my tablet to keep up with games and they are doing great this year. 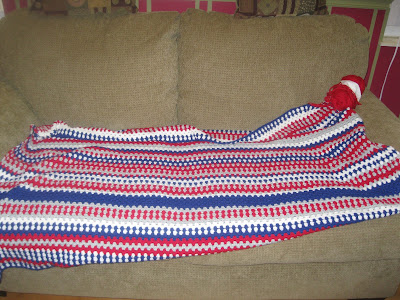 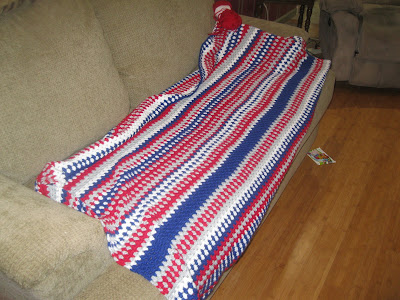 They have won the last 10 of 11 games. So proud of my Cubbies. It's a great season so far.

I'm also making a baby blanket for a second cousin. She has been married for 19 years and trying to have a baby for 18. She found out last month that she is pregnant. I am keeping my fingers crossed for her while working on this blanket. I love making baby blankets. I'm going to make a little hat to go with it if I don't run out of yarn.  I hope you can see the pattern. It's a little hard to make out in the photos. 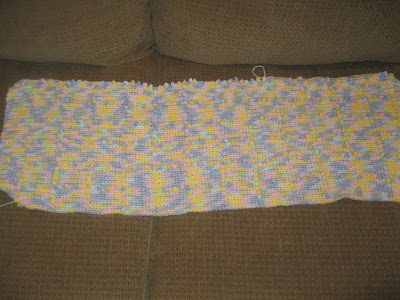 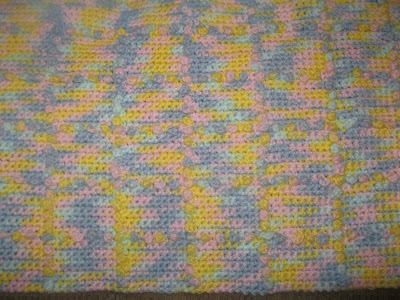 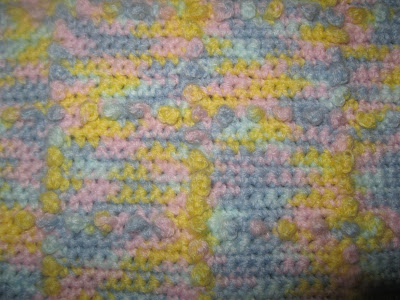 I've also been slowly trudging through a CAL that started in January. I'm slow and I have to make allowances for my hands. I don't always get to crochet when I want to but I have found that if I take it slow and don't overdo it, I can get some rows done every day. I definitely am going to finish this CAL. I am learning to read charts on this one and I am really enjoying it even though I messed up the last round and need to frog some of the squares. These photos show just a small number of squares. 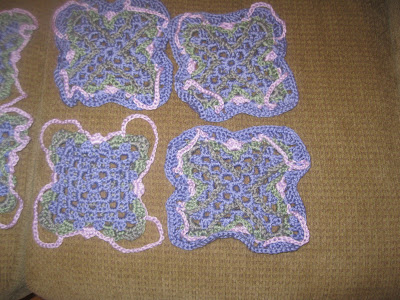 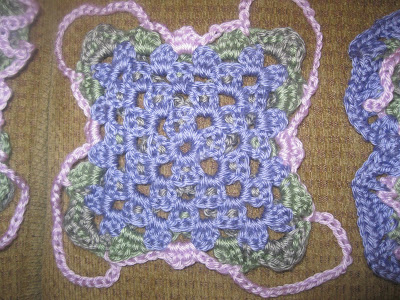 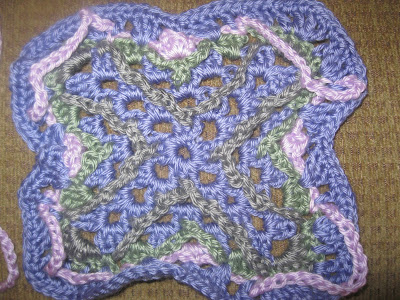 I've also bought my yarn to do a Sophie's Universe CAL which is actually over but I've bookmarked the pattern http://www.lookatwhatimade.net/crafts/yarn/crochet/sophies-universe-cal-2015/sophies-universe-cal-2015-information/. I absolutely feel in love with the photos of this one on Facebook and I honestly can't wait to start it. I have always been a one at a time project maker which has kept me from doing much but I'm finding that having several projects going at the same time is fun. However, Sophie's Universe is BIG and detailed and beautiful and I want to dedicate myself to it properly. We'll see how long I hold out. :)

I have been doing counted cross stitch projects. I finished this one, the Lizzie*Kate Mystery for last fall and I love it. I need to press it and get it framed along with another one I did last year. Here they are. I love doing Lizzie*Kate cross stitch. She has the cutest ideas. 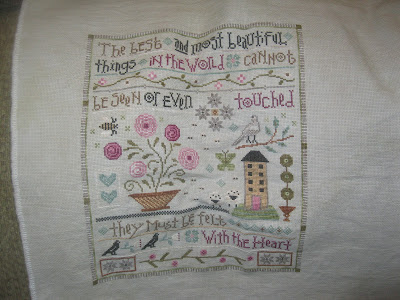 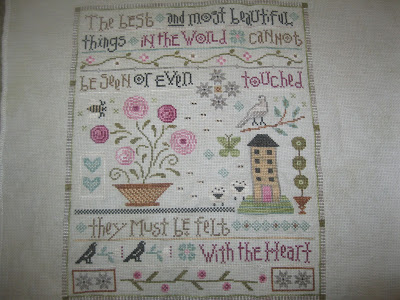 Now I'm working on Elijah's birth sampler. I am little behind on it as he was born in 2012!!! But his Mom (my DIL) told me not to worry; it was more for her than him anyway. This is what I've gotten so far. I designed this one myself and it's sort of bits and pieces being pulled together. There really isn't a graph. This is the first thing I've ever really designed and I guess I've been slow to work on it because I wasn't sure of myself. It's turning out well so far. There will be a row of seashells around it as a border. 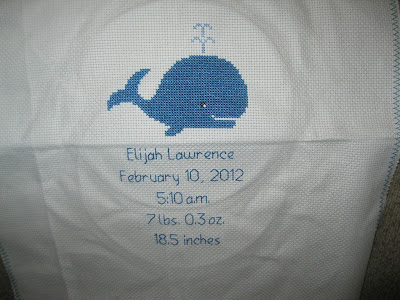 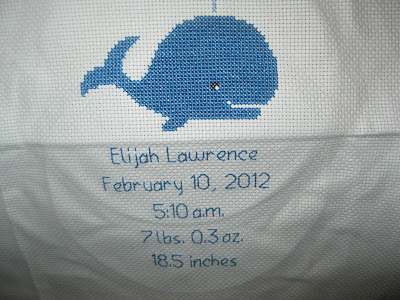 I'm also finishing up a Halloween cross stitch from last year. Whew, I went from single minded projects to full blown out of mind crafting!!! 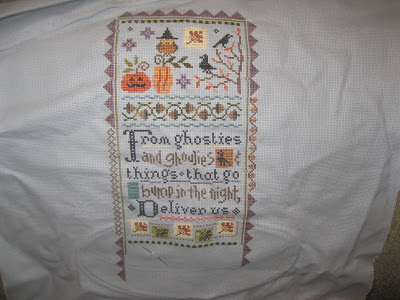 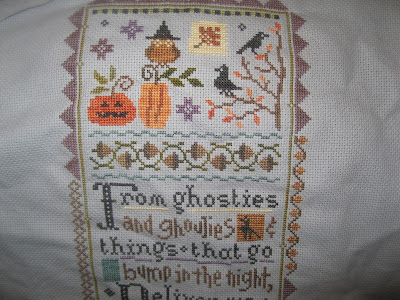 I am designing Jellybean's birth sampler but I've not got it all together yet. I have a picture of it in my head and I won't be able to show any of it on here since Abby reads my blog. I want it to be a surprise. She knows some of the elements but I've made a few changes since I told her and I think it will be much better. So no photos until it is completed and given to her.

We had a visit from Sweet Baby James and his Mama and Dada a couple of weekends ago. Whew, that kid is a bundle of energy. He is so funny and is totally a two year old. I know I shouldn't laugh but Mimi's get the privilege sometimes. When they were trying to get him to do something, he would throw himself in the floor with his arms stretch over his head and say, "I lay down!" To me that was hilarious but then I'm not having to deal with it on a daily basis. I think he's wearing his Mama out. She's counting the days until Mother's Day Out starts up again.  :)

He's gotten very independent as two year olds do. We have a planter on the front porch that looks like a bicycle and he pulled it out and climbed on. It's only got 2 small little braces at the bottom to keep it upright so I was holding the handle bars so it wouldn't tip over. He pushed my hand away and said, "No, Mimi. I ride myself!" I ended up having to put my foot against the one of the wheels so it wouldn't tip. He did a great job balancing himself on it. I adore this little man!!!

I've been on a shopping spree for the grands also. I sent the DIL in GA money to buy them clothes with but Eli sort of got gypped. So Grammy got on her favorite shopping device and ordered bow ties and shoes for him. Then I ordered PJ's for James. I've also been doing some shopping for me as in new crochet hooks, a set of afghan crochet hooks, a couple of books, yarn. Oh my, I really don't want to see the credit card bill this month.  :)

So there you have it; all caught up with the month of July. I've also been reading quite a bit and listening to audio books. I like the audio books when I'm working. They are also great to crochet and stitch to especially since there's not much on TV that interests me at the moment. I hope to be back soon with a Book Challenge Update.

Until then, hugs to all my great bloggy pals. Thank you for all your comfort and support this past year. The future is looking bright and I hope to post more often. No promises because, you know, the reasons listed in the first paragraph. I have been trying to keep up with all of you and comment when I can. I adore my bloggy friends.

Posted by Grammy Braxton at 3:23 PM