The Month That Got Away

Wow, what a month February has been! I've sat down several times to do a post only to get up and do something else and forget. This has been a month of snow, cold, birthdays and more birthdays. It has been a busy month.

I am going to try to remember everything that happened this month, but I know I will forget something. Here goes.

Snow, snow and more snow. We have had our share of snow this winter. There has been several inches of snow around here this year. We really haven't had much snow in the past few years and it has been kind of nice except it's cold! I'm not a big fan of cold weather and we have had that in spades. It actually was warmer when it snowed than earlier in the month. I took these photos of the last snow.

Love the animation!  I hope you can see it. I made these with my phone. The first one was at the start and the second was about an hour later. We ended up with about 7" of snow total. Unlike the earlier snow in January, there was no ice underneath this one.

Birthdays. We had 4 birthdays in one week. Sweet Baby James turned 1 on Sunday, 2/9. We went down for his birthday party and he was a trooper. He is such a sweet little guy and so easy going most of the time. His Mom and Dad decided to have his party at a local pizza place and the food was really good. Abby made the cake and ummmmmm, delicious. 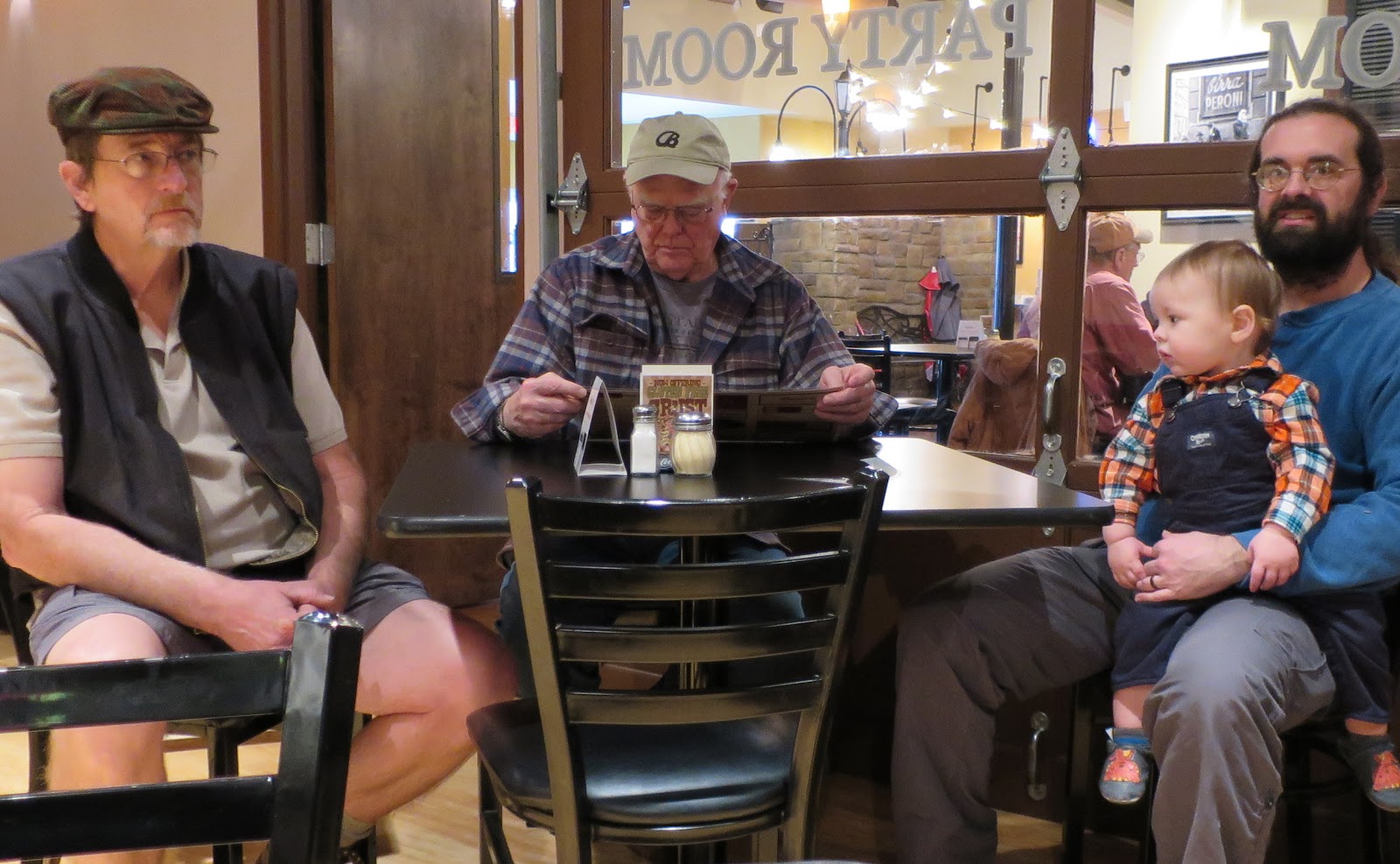 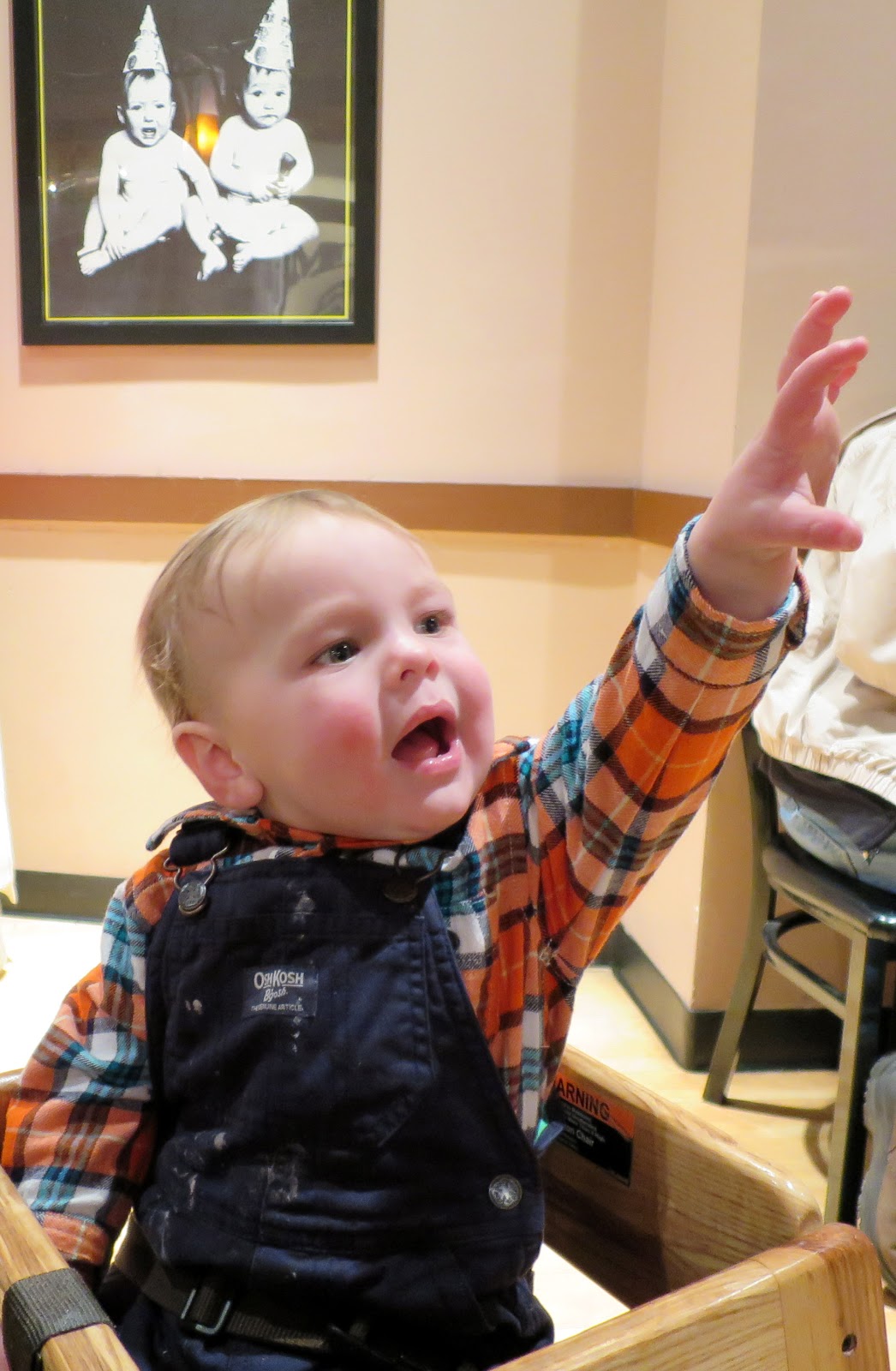 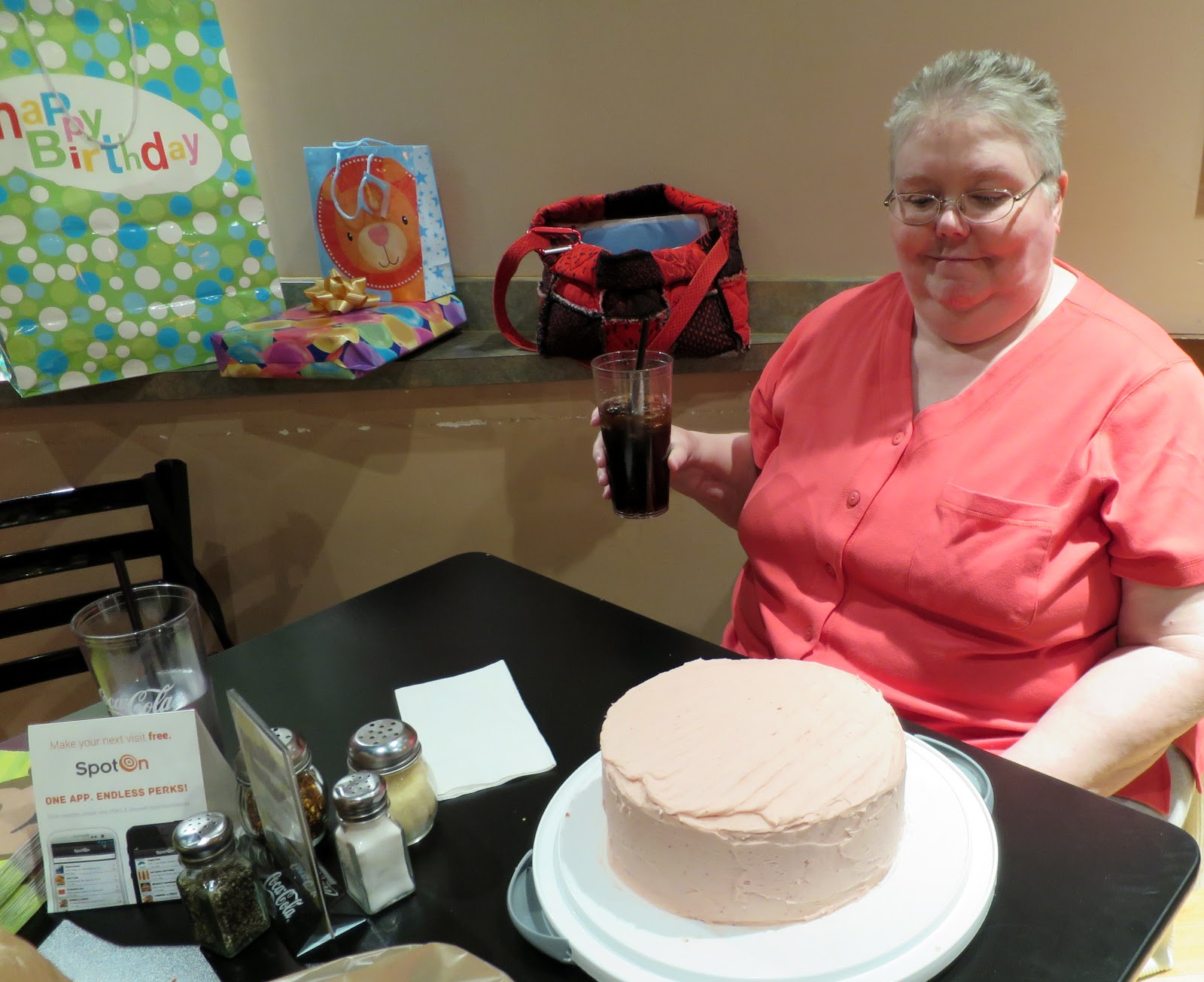 I couldn't resist putting this one in. I look like I'm ready to dive head-first into the cake. 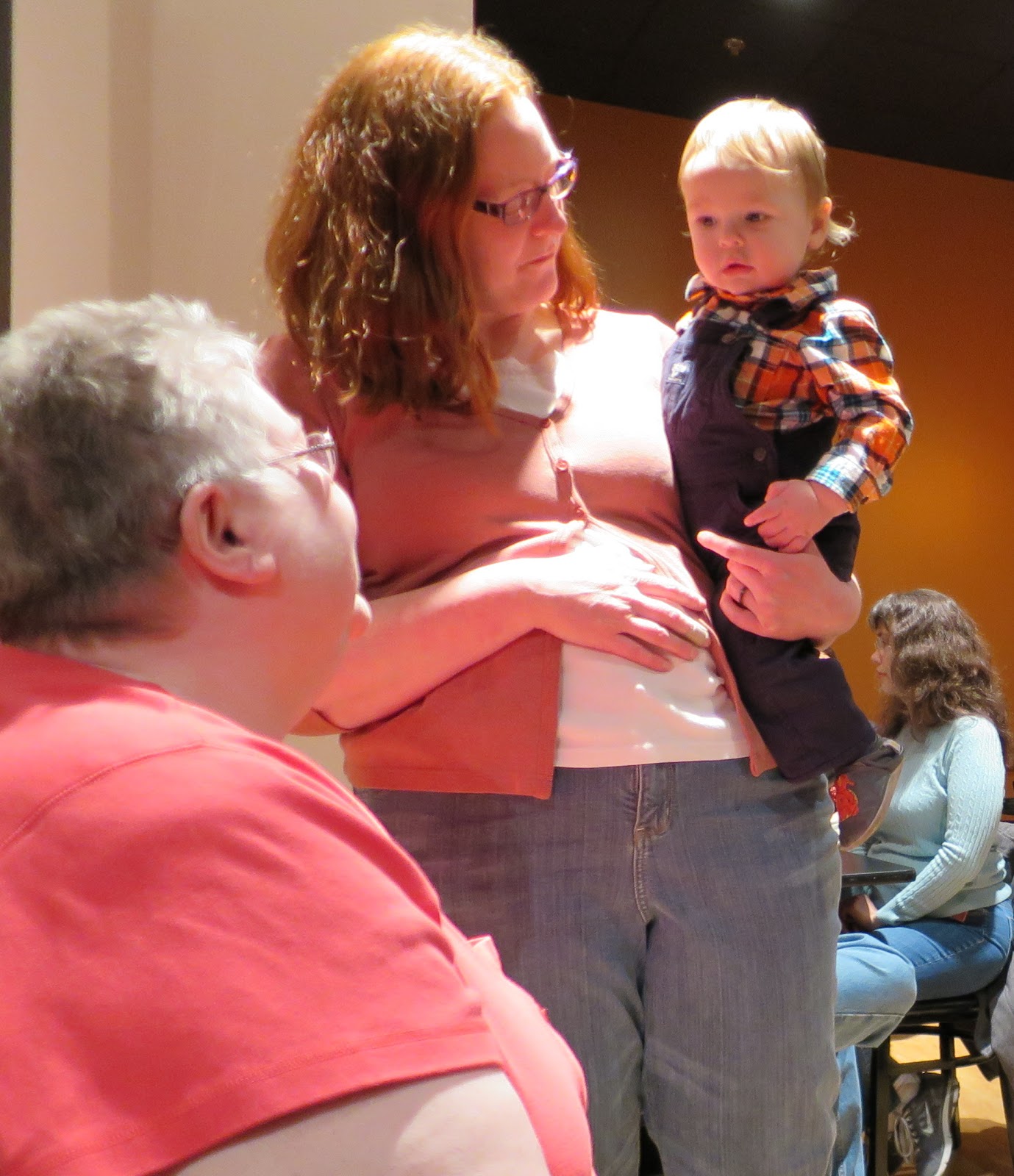 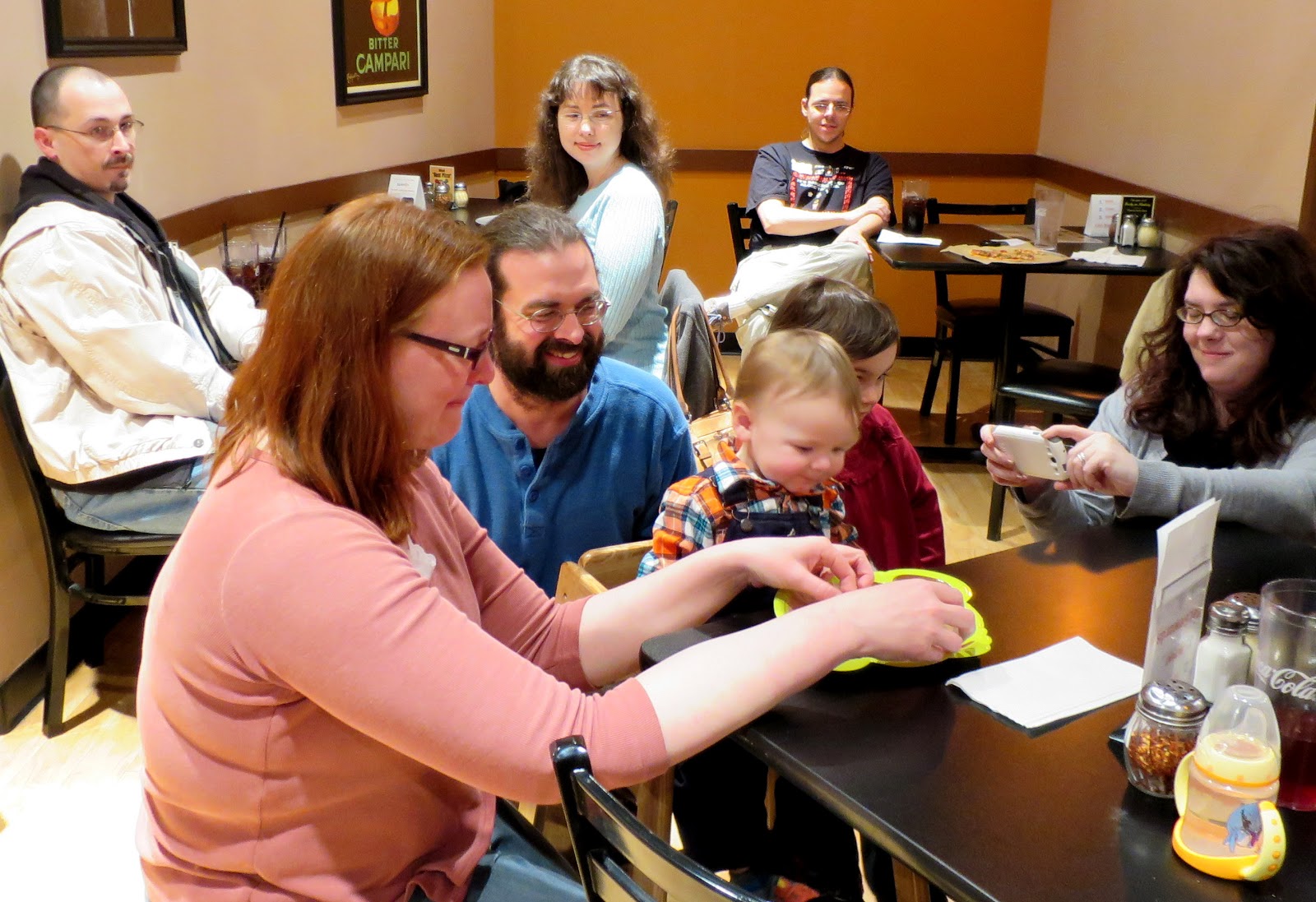 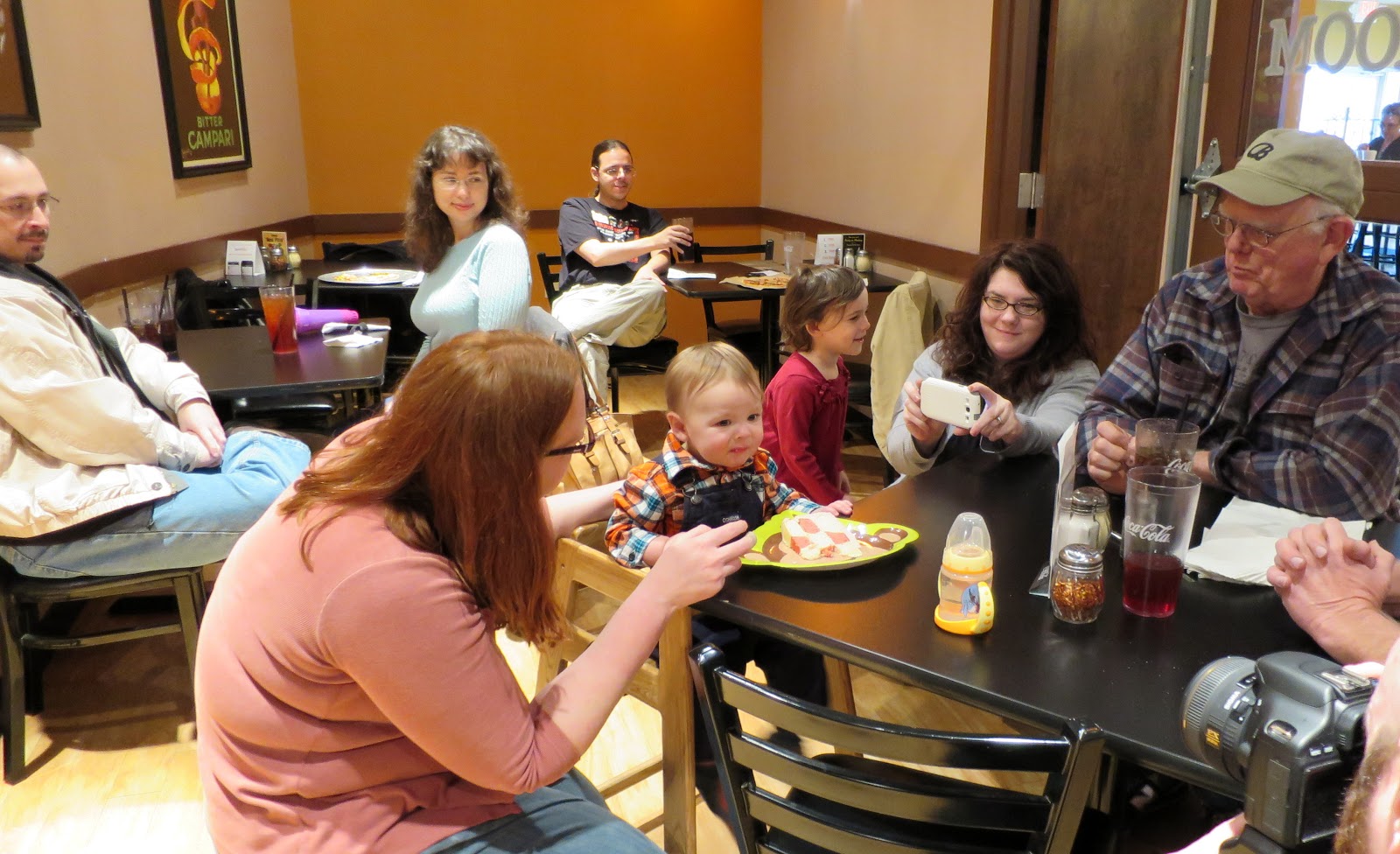 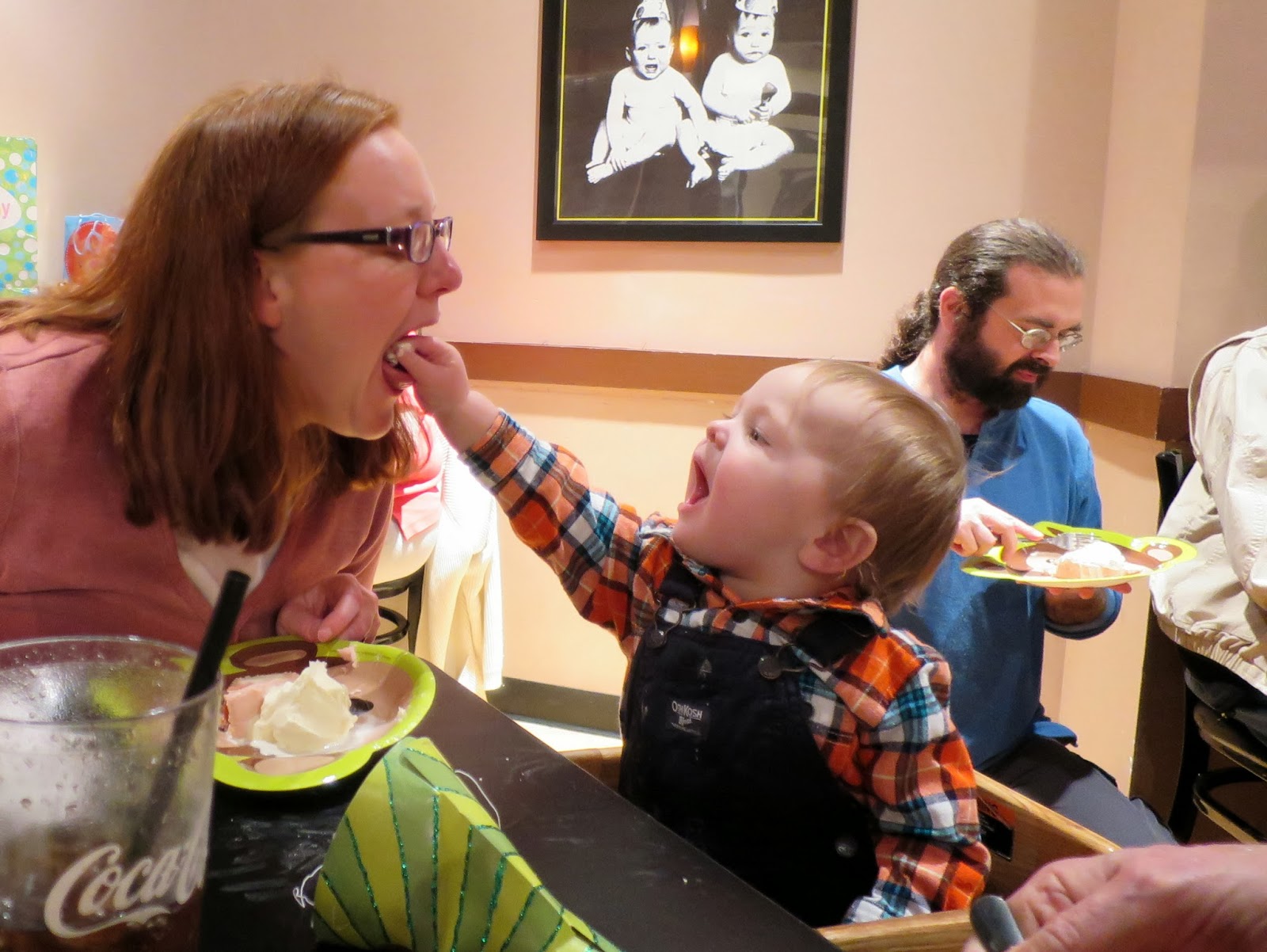 James fed Mama ice cream. Notice his mouth? He opened it like that for each bite he fed her. :) Everyone liked his gifts. He was a little bit overwhelmed. 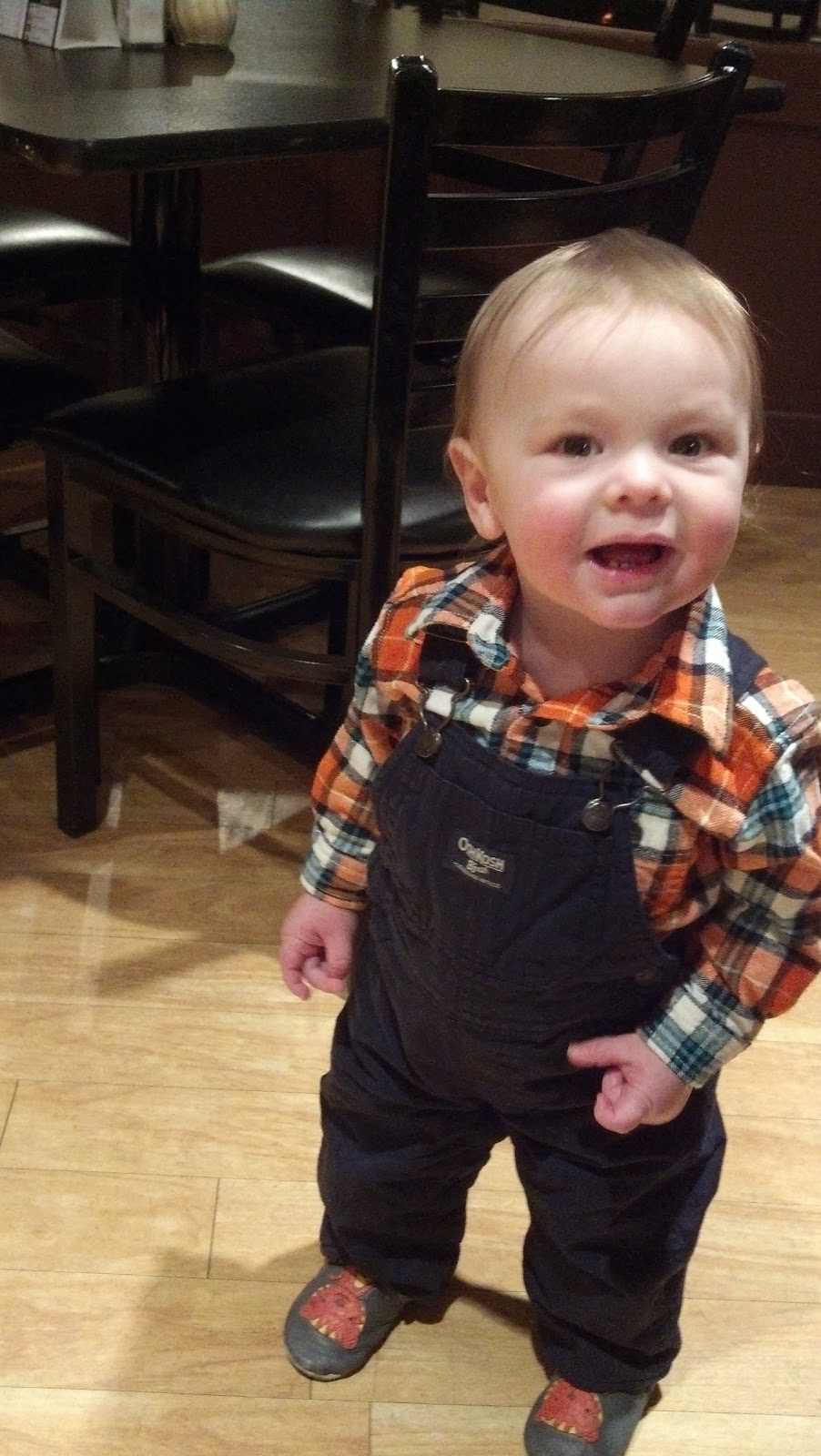 Elijah also had a birthday. He turned 2 on Monday, 2/10. I only have this photo of a few days after. 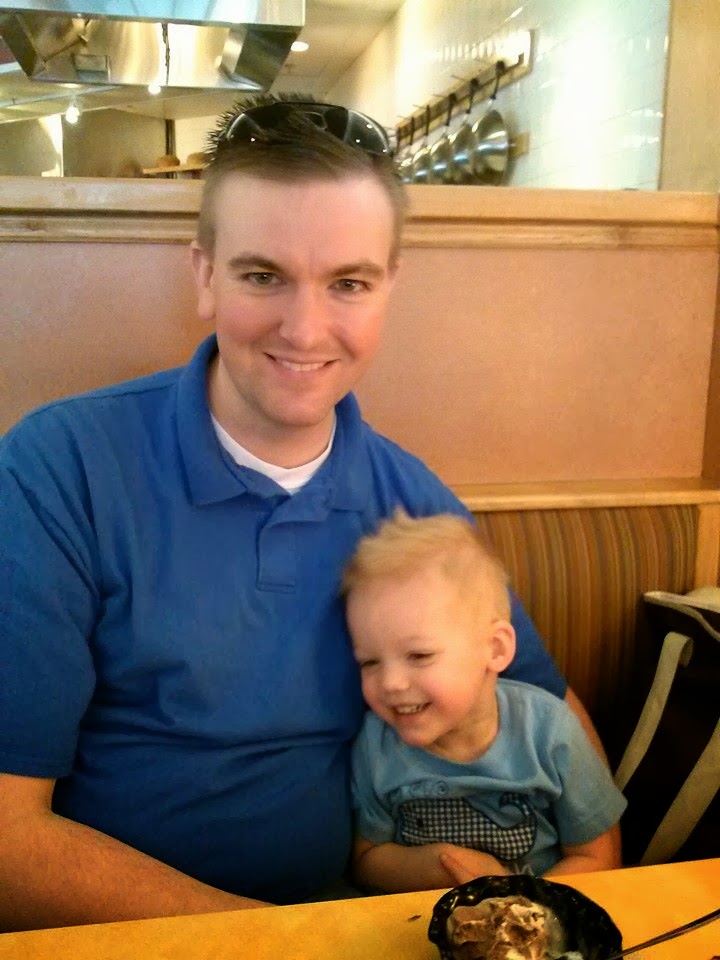 Elijah and his Daddy (my son, Doug) 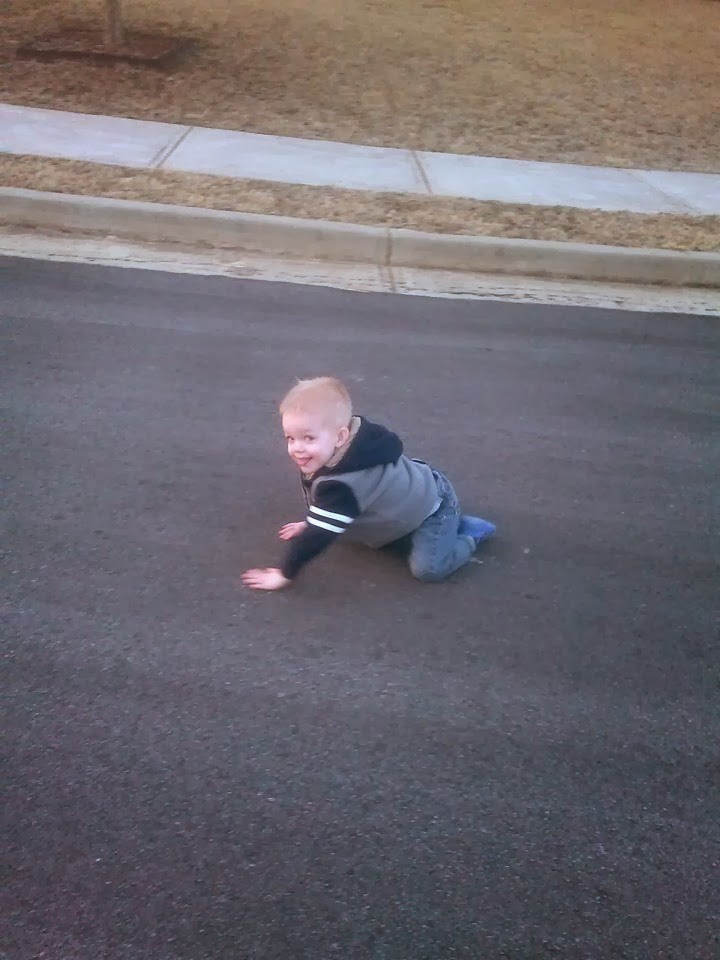 Elijah being silly and crawling backwards on the road.

Then there was my daughter, Abby's birthday. Her birthday was Wednesday, 2/12 and my birthday was Thursday, 2/13. Whew! We were birthdayed out by Friday. It was a quiet weekend. I had said earlier in the week that I really wanted a good cheeseburger, so Friday we went to Cook-Out and had a great cheeseburger and fries. I have to say it was a great burger, not as greasy as some and it did have the cooked on a grill taste. May have to go back.

The crafting front has been a bit of hit and miss lately. I have been working steadily on dishcloths and giving them away. I've also started on a scarf for a young man as a surprise. Of course by the time I get it done, he won't need it but there's always the fall and winter to come. We made a day trip to North Carolina a week ago Saturday. It was a good day for it except for the wind. We have to cross the mountains to get to NC and the wind was stiff. We went almost to the South Carolina border to get some tires my husband wanted for his home built tractor. Then coming back through Asheville, we stopped at Jo-Ann's. I needed some more crochet hooks. I have trouble using the regular hooks. It hurts my hand to crochet with them but I discovered ones with a built up section that fits comfortably so I can crochet with less pain, not without pain but less. As usual, the Hubs was being silly in the store. He likes to try to embarrass me but he should know that after 42 years, that ain't gonna happen often. We were looking at the hooks (and there wasn't a great selection - they were having a 25% off sale) and I couldn't find the size I wanted. He made some comment, I can't even remember what it was but I know it was silly. I just shook my head and moved on. Another lady was standing there looking at him and then she looked at me and said, "Does he always do this?" I said, "Yep. I just humor him and keep moving". She laughed.  He finally wandered off looking around and I was able to get some more dish cloth yarn. He is a hoot in a store most of the time. The cashiers, for the most part, go along with him and have a good time.

I found this on Facebook the other day. I think it works, don't you? 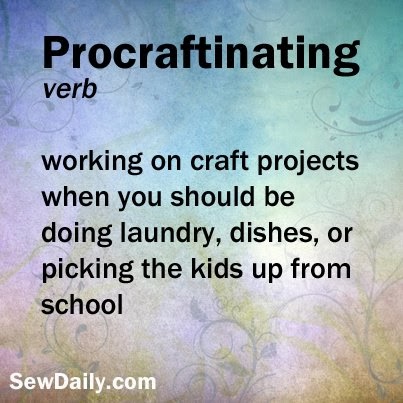 So there is my month.  My Mom is having surgery on Thursday so please keep her in your thoughts. She is 82 and has been battling a sinus infection and nose polyps for almost 2 months. She is having surgery to remove the nose polyps. I am concerned because she hasn't been sleeping or eating very well and surgery at her age is always a matter of concern.

As always, thank you for stopping by. I hope you have a great week where ever you might be.