but hopefully, nothing ugly!  Hello blogland! I have been missing for a while, I know. It's been a rough couple of months with a couple of wonderful things to make them easier to deal with.

First, I had to have some dental work in September. I had a tooth that had some root decay and so my dentist scheduled a root canal. However, when he got in there, the root was too far gone and I had to have it extracted. Ouch! Then he told me I had to wait until January before I could have a replacement!!! Thank goodness it was a molar and can't be seen.

After recovering from that and seeing doctors for routine checkups, I caught a bug and got really sick. I had all the things that go with a bad bug and it put me to bed. I lost my appetite because, basically, I couldn't keep anything down. Then, as usually happens when I get attacked by a virus, I went into an RA flare. Unfortunately, this one didn't respond to my normal round of steroids and I just kept getting weaker and sicker. After about 3 weeks of not eating and not getting any better, I decided that I might ought to go see a doctor, in October.

The Hubs took off work to take me as I was so weak, I didn't think I could drive.When we got there, I had lost 18# and my BP was 90/64. Guess that's why I didn't have the energy to stand or even sit up. I ended up lying with my head on the foot rest of the exam table on a pillow. Blood work was done and questions were asked. Blood work showed my inflammation rate was through the roof along with my WBC. I was given the option of getting fluids in the office and going home, or going to the hospital. Hubs and I talked it over and got the doctor's opinion, and so I checked into the hospital for a couple of days. Since Hubs had to go back to work the next day, he didn't want me at home alone in case I fell or needed some help.

I have to say, as much as I dislike being in the hospital, the nurses and doctor were wonderful. I immediately got started on fluid since I was dehydrated and after seeing the hospitalist, a mega dose of steroids. I also ran another fever while there. When I was admitted, I was freezing and ended up with 3 blankets on me. Sometime in the night, I started throwing off blankets and getting my legs out. The nurse told me later that I had a fever when I checked in and it broke during the night. WHEE! That same night, I had a little bit of an adventure. The Hubs had brought down my CPAP machine and after the CNA got my vitals for the night, I put it on and got ready to sleep. I pushed the button to turn it on and nothing happened. So I sat up and tried to see what was going on but couldn't figure it out. So I pushed the button for the nurse and nothing happened. Oh gee, I was without communication and without power to my CPAP. So I sat on the side of the bed, tethered to the IV pole, trying to figure out how I was going to get the nurses' attention. So, being the country girl that I am, I called "YOO HOO". Nothing. So I tried again and my nurse opened the door and asked if I needed something. Somehow, the machine had gotten unplugged and the cord for the nurse button had been loosened from the wall. We had a good laugh and I finally got some sleep.

So the final diagnosis was a severe out of control flare that just took over and messed up my body. After a bag of antibiotics to kick any little bugs that might be still wandering around, 2 bags of mega steriods to kick the inflammation and 2 bags of fluids (which caused many trips to the bathroom HA), I was declared okay to come home with an appointment scheduled to see my primary. I stayed weak for the next several days and when I saw the doctor, my BP was still very low. So she came up with a plan of checking my BP every day and stopping my BP meds until the top number went above 120. I am happy to say that everything is back to normal now, or as normal as it can be with me! :)

So that's the bad. Now for the good.

While I was feeling so bad and before I finally went to the doctor, the Hubs brought in the mail one day and there was a card from my daughter. When I opened it, I squealed! 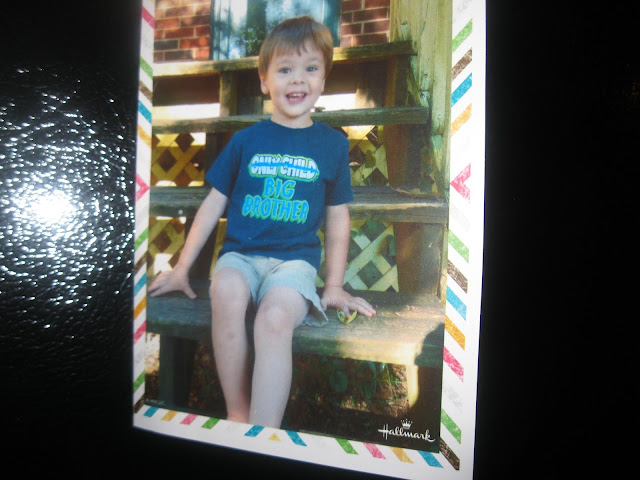 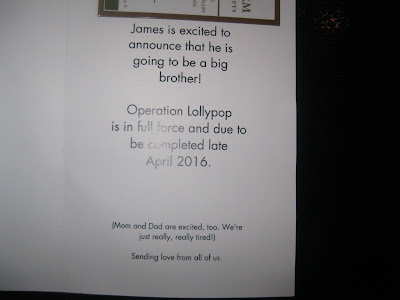 I'm going to be a Mimi again!!!!!!!!! Lollypop will be here in April 2016 and I am thrilled. This makes 5 grandchildren. I am so blessed!!!!  I hope you can see Jellybean's shirt. It says "Only Child" with a slash through it and then "Big Brother" below.  Sorry for the flash on the announcement.

I also got a package all the way from France after I came home from the hospital. I have long admired and wanted a hare from Millefeuilles  I have hoarded money from last Christmas and decided now was the time. If you follow Stephanie's blog, you know that she has had some problems this summer and I didn't feel the time was right to ask for one. However, she posted on Facebook that she was back working on her hares so I emailed her and described the hare that I would like. Sweet Stephanie got to work and made me one.  Meet Miss Rosehip: 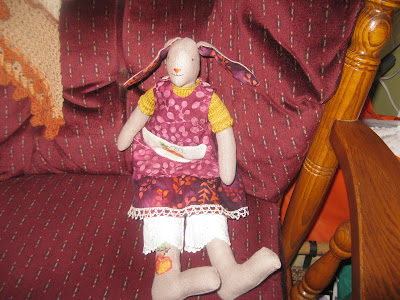 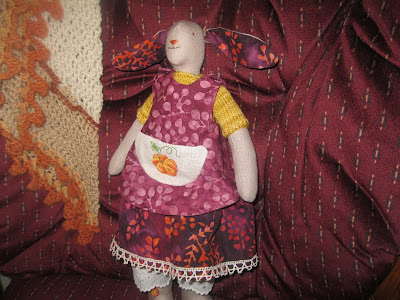 I cried when I opened her. She is so beautiful and is everything I could have imagined. So now I am the proud and honored owner of a one of a kind Millefeuilles hare and I will treasure her. Thank you, Stephanie, so much for Miss Rosehip and for sending her when I needed her most.

So now I am caught up once more. Hopefully, but no promises, I won't be so slow in posting going forward. But then you know me, "The Queen of Procrastination".

Oh, and a big thank you to everyone who sent postcards for my granddaughter. She is thrilled and so am I.

Thanks for stopping by. You make me happy!

Posted by Grammy Braxton at 5:10 PM