Time to be optimistic. November was basically a lousy month! We had to say goodbye to my SIL's father, a man who never met a stranger. He and his wife, Becky, welcome us into their lives when our children were married and we have felt this loss deeply. He passed away on November 19 after battling cancer. Doug and Abby moved to Sparta, TN, a year ago to be near them and for Doug to start taking over the family business. It is so sad that our youngest grandson will never know his Granddaddy. Jim was a kind, funny, caring soul.

So now we move forward. Tennesseans are wonderful people who give and give when the need arises. There have been cars, trucks, vans, semis and every kind of vehicle rolling into Sevier County bring much needed supplies, both for people and animals. Money has been given, all kinds of dog/cat supplies, clothing, towels, personal items, etc. We aren't call the "Volunteer State" without reason. I'm so proud to be a Tennessean right now.  You can't keep up down for long!

There is so much I want to talk about. I just hope my poor little brain will remember it all. This "Queen of Lists" hasn't made many lists lately. I don't know if I'm just getting lazy (lazier ?) or if I can't remember to make the lists. It could be a little of both, I guess.

First off, after at least a year of consideration and research, I have finally cut the cord with my TV cable company. I have been thoroughly displeased with the fact that I watched, at the most, 5 or 6 channels, and yet I was paying for many, many more. Dropping my cable and only keeping internet service will save us over $100 month. There are a lot of alternate services and apps that can be had for that kind of money. I've checked out several different choices including Roku, Chromecast, Amazon fire stick, etc. I settled on Roku Streaming Stick which should be here Tuesday. Then I'll have to get my technological challenged self to understand how to connect it and get the apps I want. I'll be happy for now with being able to watch Netflix on my TV instead of my 10" tablet.

I've been doing very little crochet lately. I did make wash cloths for my GA grands and took them down on Thanksgiving Day when we all got together. I think they were actually more for Trisha. She had mentioned when I was there in August, that she loved the baby wash clothes for the kids but all of them were wearing out. She loved the ones I did. I did 6 altogether, 3 each in green, purple and blue, their favorite colors. Trisha like one style more than the others (I did 3 different types) so I will be making probably 6 more after Christmas in that style.

Both of my granddaughters have birthdays this month along with their Mom. Ella was 8 (!!) on December 2 and Lilly will be 6 (!!) on December 10. Trisha's birthday was Monday, December 5, but I won't tell her age. *smile*  I always send money to the grands along with their card in the amount of their age and this year I cross stitched book marks for the girls with their name in their favorite color. They both are reading very well and have already progressed to chapter books so I thought the bookmarks would come in handy.

I've also finished Jellybean's birth sampler except for the border. I'm stuck on it. I had thought about doing a rainbow border (you'll understand when you see the photo) but I'm now concerned that will be too much. I think it needs to be one color and nothing overly elaborate. Take a look and see what you think: 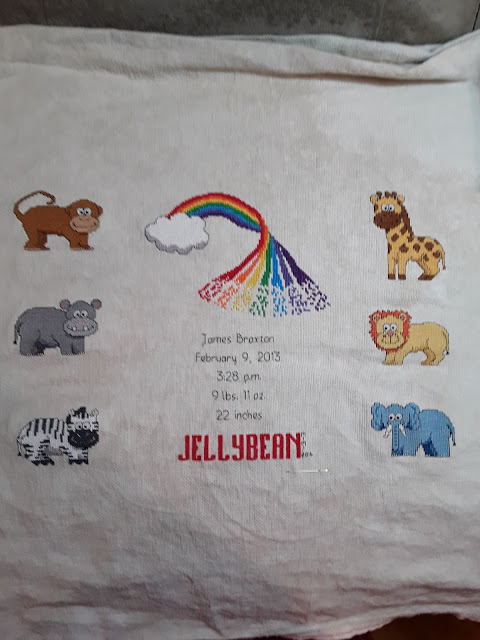 I'm pleased with it. I want to get it finished and framed before his 4TH birthday. Ha!

Next I will start on Lollypop's and I thought it would be nice if I can do the same border on both. Again, what do you think?

We had a really nice Thanksgiving in GA this year. This is the first time we have celebrated there since the kids moved. They have a lovely home and we all had a great time talking, laughing and eating. We really missed Abby, Doug, James and Sam. They spend Thanksgiving with GiGi (Jim's mother) in Chattanooga. She turned 100 this past summer and they felt since Jim's passing that they wanted to spend that time there. The grands, as usual, played, ran, chased other, etc all afternoon. There was one mishap when Ella and Elijah were running and Elijah fell, ran into the wall, something. No one actually saw what happened but he got pretty upset and almost passed out. Doug brought him to his mama and after some lap time with mama, he went back to playing. On Sunday, Trisha noticed his foot was swollen and bruised. They took him to urgent care and had xrays and discovered his foot was broken in two places. It's hard to believe that he walked, ran and played from Thursday to Sunday without complaining about it. The good news is that he won't have to have surgery. He will be in a boot for at least another week (3 weeks in total). He's young so his bones should heal without any problems. Oh these little ones, it's always something.

So that's it for now. I am trying to get Christmas shopping finished as soon as possible. This year we are buying only for the grands and our niece and nephew, so I'm almost finished. Then I can chill out, read, crochet and cross stitch.

Oh, one more thing. I'm doing the book challenge again this year. My goal is 60 books for 2016. I'm
within 5 books of reaching it. I think it's doable. I'm back to listening to audio books so it's been easy getting the goal. I have always loved them because I can listen while doing other things. I really like them while cross stitching and crocheting. So now what goal should I set for 2017?????

As always, thank you for visiting and being my bloggy friend.