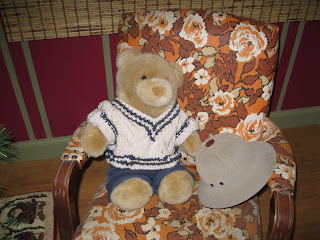 This little bear is Theodore. Theodore came to live with me 11 years ago. He was a gift from my nephew and niece after I spent Christmas in the hospital. Theodore means a lot to me, not only because of the sweet little ones who gave him to me, but also of what he reminds me.

Sunday before Christmas, 2001, was not a good day for me. I had been sick all weekend with what I thought was the flu. I couldn't eat and had spent almost all day in the bathroom. My son and soon-to-be DIL had come for a visit and I was so weak that I had trouble taking a shower. All I wanted to do was sleep. After they left, I went back to bed but soon had to go to the bathroom again. I passed out while on the commode and fell into the floor. This was the first time I had ever passed out and I didn't fully understand what had happened, just that for some reason I was lying in the floor and my husband was trying to get me up. He finally had to tell me to stop fighting and let him help me. When he got me back to bed, he took my blood pressure or tried to. There wasn't much of one, which scared him enough to call 911. He got me dressed before the EMT's arrived and I was lying there wondering what all the fuss was about. I wasn't in any pain and other than being very light headed, didn't think an ambulance was necessary.

After my first ever ride in an ambulance (there are a lot of firsts in this story), we arrived at the ER and I was whisked into a room and examined. The doctor ordered an Xray and off I went to get that done. The technician wanted me to stand up so he could get a clear picture but since I was so weak, he let me sit on a stool. After getting me positioned, he stepped back to press the button and I threw up. Lots and lots of dark fluid which the technician called "coffee grounds". Back I went to the room and everyone seemed to be moving at a quicker pace. I was told I needed to have a tube to my stomach and the young nurse was going to do that. This tube had to go through my nose and down my esophagus to my stomach. Bless her heart, now I can feel sorry for her but at the time, I was just irritated that she couldn't get it down to my stomach. The tube kept coming out my mouth and I finally told her (not asked) to just stop! I told my husband I wanted to go home, that all of this was ridiculous, that I wasn't sick. I had thrown up, got all the nasty out and I was feeling much better so it was time to go home. He just stared at me and didn't say a word. The EMT in the ER came into the room and told me I had to have the tube because I needed my stomach pumped. Nope, says I, I'm going home. Nope, says he, you are not. Yep, says I, I am. Nope, says he, you have a life threatening situation going on and we need to do this.

Hmmmm, that stopped me in my tracks. Life threatening??? Ooookkkkaaaayyyyy. So I let them do the tube and between the doctor and the EMT, they got it down to my stomach. Immediately, lots of stuff came out. It seems I was bleeding in my stomach. So off we went upstairs. I asked where we were going and the guy tells me we are off to the CCU. For the life of me, I could not figure out what those intials stood for. I must have had a quizzical look on my face because he explained that I was going to the Critical Care Unit. Oh, hmmmm, this must be serious.

Anyway, after an endoscope the next morning, the doctor who had my case, explained that I had 3 ulcers with one measuring 4 cm. Apparently that is a BIG ulcer, but while he was doing the endoscope, he had lasered all of them to stop the bleeding. I spent 5 days in CCU including Christmas Eve and Christmas Day. To be perfectly honest, I never felt like I was sick. I felt extremely tired but otherwise, I felt fine and if they would have let me out of bed, I felt like I could dance a jig. But getting out of bed was out of the question. I ended up during that hospital stay getting 10 units of blood and 2 units of plasma. The body holds between 4 and 5 liters of blood so I had a complete oil change, twice!

I finally got to come home on Saturday, having spent almost a complete week in the hospital and totally blowing Christmas celebrations with my family. I felt really bad about that but everyone was more concerned about me than about the celebrations. I didn't realize at the time, and I still find it hard to believe today, that I was close to death. I told my mother when she came in to the CCU on one of her visits that there were a lot fo sick people in there. My goodness, there was man next door to me who had breathing problems and a bad heart; the woman on the other side was diabetic and had ulcers like I did, and the man on the other side of her passed away while I was there. I mean, these people were sick!! I felt fine. My mother, with a shocked look on her face, asked me what I thought I was? Maybe I just didn't have enough sense to know and that was a blessing.

The week after I came home, my sister, nephew and niece came to see me. They wanted to get me a gift and my sister took them to Build-A-Bear Workshop to get a teddy bear for me. Gavin was 3 and Emalee was just past 1. They were so sweet. Gavin told me that they both kissed the little heart, hugged it and put love in it before it was put in the bear. I treasure this little bear.